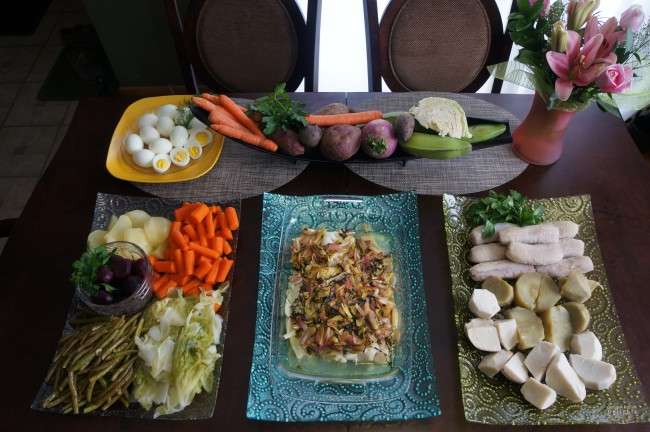 An example of a Good Friday Meal in the Haitian Culture

From the Free Merriam-Webster Dictionary, Lent is described as a period of 40 days before Easter during which many Christians do not eat certain foods or do certain pleasurable activities as a way of remembering the suffering of Jesus Christ.

The 2015 CIA Factbook reported that around 80% of Haitians professed to be Catholics while Protestants made up about 16% of the population (Baptist 10%, Pentecostal 4%, Adventist 1%, other 1%). Other sources put the Protestant population higher than this, suggesting that it might have formed one-third of the population in 2001. (Wikipedia, 2015)

In Haiti, Lent and Easter meals are imperative and unique. During Lent season, fish (seafood) is consumed every Friday as well as roots and vegetables. Fish is the main dish for consumption but a wide variety of seafood to change the routine is adaptable also. Mostly dried salt fish is served during lent and holy week. If fresh fish is consumed, either Poisson Gros Sel or Poisson Creole or Creole Fish are the traditional dishes served in many households.

A typical Holy Week menu will consist of:

The photo shows a simple typical meal to be served on Good Friday. The simpler the meal is, the better because again the observance of Jesus suffering is very important to follow.

For the remainder of the week, I will be posting the recipes so you can have an idea on how to create your Good Friday meal. Enjoy!