National Dishes of the Caribbean.

WHAT IS A NATIONAL DISH?
Almost every country across the world has their national dish; the definition of a national dish is a meal or type of food which is indigenous to one’s country. This food is normally considered a dietary staple, created with uniqueness and forms a part of a Person’s identity and/self-image,. I like to think of a national dish as a culinary tradition which embraces an individual’s cultural heritage, this first and foremost being the West African ancestry infused with cultural practices adapted from the Amerindian settlers, Chinese and Indian laborers and its colonialists (British, French, Spanish, Etc…), wouldn’t you agree?

Since my website intends to yield an element of Caribbean flavor, allow me to share with you all a sample of each islands’ national dish.

ANGUILLA – PIGEON PEAS & RICE
Pigeon peas are what westerns refer to as “beans,” and of course most people already know what rice is. As previously mentioned, rice and peas is a culinary favorite amongst island people.

In the case of Anguilla they have crowned it as their national dish, you can use fresh peas which would need to be soaked (overnight is best) or tinned peas which are ready to use. The dish is spiced with the appropriate condiments and served with meat.

ARUBA – KESHI YENA
This culinary dish consists of spicy shredded beef, chicken or goat. The meat is somewhat compressed (for lack of a better word) with Edam cheese or Gouda and finally baked.

ANTIGUA AND BARBUDA – FUNGIE & PEPPERPOT
“Fungie” or “Fungee” is a dish made with polenta (cornmeal) it is almost akin to the Jamaican delicacy “Turn Cornmeal and the Barbadian dish “Cou-Cou.”  Pepperpot is a thick stew with an assortment of salt fish and vegetables (including okra, spinach, eggplant, etc..) herb, spices and boiled into a thick, dark green hearty soup.

BRITISH VIRGIN ISLANDS – FISH AND FUNGI
Similar to Antiguan’s fungi, this national cuisine is essentially cornmeal mixed with okra and not forgetting the fish on the side.

BAHAMAS – CRACK CONCH WITH PEAS AND RICE
Conch which is a shellfish, a favorite amongst the Bahamian community, so much so that conch is featured in the national dish. “Cracked Conch” refers to a style of conch, cooked in batter. It is usually served as a main meal with peas and rice, macaroni, potato salad and plantain on the side.

BARBADOS – FLYING FISH AND COU-COU
Bajans love their flying fish and cou-cou, interestingly, flying fish is namely found around the Barbadian waters and is prepared with an aromatic sauce of tomato, onions, and thyme just to name a few.

The fish is grilled, steamed, fried or battered. Cou-Cou is cornmeal (polenta) other islands such as Jamaica, Antigua make savory dishes using cornmeal, again it is made with okra and is traditionally served on Fridays.

CAYMAN ISLANDS – TURTLE
The national dish of the Cayman Islands is no other than a turtle. Turtles are a local delicacy for Caymanian people; they are cooked in many ways, stewed down with other ingredients, used in soup or braised as steak.

CUBA – ROPA VIEJA
Ropa Vija means “old clothes” in Spanish, Ropa Vieja is West African influenced with a Spanish twist. This dish is a mixture of shredded beef, cooked with a tomato base infused with herbs, served on a bed of yellow rice with black beans and fried plantain.

DOMINICA – MOUNTAIN CHICKEN
Dominica – The nature isle, not to be mistaken for the Spanish speaking island Dominican Republic, this creole delicacy is locally known as crapaud (pronounced crappo).

Mountain chicken is frog legs, which is seasoned and fried until golden brown and served as a main entree with peas and rice or plain rice (white rice). In 2013, according to Inside Dominica, callaloo was the preferred choice of their national dish.

GRENADA – OIL DOWN
Grenada the spice isle’s national dish is “Oil down” which is cooked in a large pot known as a Karhee. This meal is made with breadfruit, dumplings, callaloo and a meat of your choice (customarily salted codfish). The ingredients are sautéed in coconut milk imbued with an abundance of herbs and spices for intense flavor.

GUADELOUPE – PORC COLOMBO
Porc Columbo is essentially “pork curry” when translated into English. It is pork seasoned with a bunch of unique herbs and spices. The emphasis being “colombo” which is the French Caribbean’s version of curry powder, where uncooked rice is added to the spice mixture, yielding a nutty texture.

GUYANA -PEPPERPOT
Although Guyana is located in South America, its history and vibrant culture are shared with the rest of the Caribbean, therefore is in classified as a Caribbean country regarding its culture and historical context.

Pepperpot predates to the days of the Amerindian people, cassareep (the black liquid from the cassava root) plays a significant role in this stewed meat dish. Cassareep was used by the Amerindian as a method to preserve meat, and the practice is still incorporated in Guyanese cooking.

A choice of meat; beef, pork, and mutton is used along with a combination of herbs, spices (cinnamon, brown sugar, orange peel, etc..) with ground provisions (term used to describe root vegetables) and bread.

HAITI – GRIOTS WITH RICE AND BEANS
Haiti known as the pearl of the Caribbean, its national dish is unofficial, however according to my findings beans and rice with pork (griot) seems to be a favorite amongst the Haitian people. Small cubed pieces of pork are seasoned, boiled then pan-fried, giving this mouthwatering flavor.  Rice and peas (riz et points) and green bananas are complementary to this dish.

JAMAICA – ACKEE AND SALTFISH
Characterized as “The land of wood and water” by the Arawak people. Ackee and saltfish is a favorite amongst the Jamaica people, Ackee bears a striking resemblance to scrambled eggs but is quite bland when unseasoned.

Once the Ackee is carefully washed off, the salt fish’s (codfish) salty extract is boiled off, together with both Ackee and Saltfish are sauteed with a mixture of herbs and spices for flavor, some people like to add bacon.

The dish can be accompanied with boiled or fried dumplings, green banana, fried plantain, breadfruit, and hard dough bread. It is usually eaten for breakfast or dinner, but many people choose to eat it at any time of day on any given day.

MARTINIQUE – GRILLED SNAPPER WITH SAUCE AU CHIEN
The Martiniquean delicacy of Grilled snapper is served in a sauce made of chives, parsley, tomato, pepper and other variety of spices.

MONTSERRAT – GOAT WATER
Montserrat was known as the “Emerald of the Caribbean” adore their goat water, don’t be misguided by the name. Goat water is a thick, tasty stew made from goat meat. The meat is seasoned and simmered down to slow, cook and release its unique flavor.

The trick with goat water is the preparation of the meat, meaning not to overcook nor should you undercook it. Goat water is served with a combination of bread, ground provisions or rice.

PUERTO RICO – ARROZ CON GANDULES
Arroz con Gandules translates as Rice with pigeon peas, made with chorizo, a shoulder of pork, peppers seasoned with a secret sauce of sofrito. This dish can be usually found served as a main meal (dinner time).

ST LUCIA – SALTFISH AND GREEN FIGS
Salt fish and green figs which are green bananas is a national favorite for this creole speaking island. The salt fish is boiled and added to a frying pan filled with a myriad of seasoning where it is sauteed. The figs are simmered separately, to begin with, and once cooked, added to the pot to create a dynamic flavor

ST MARTIN/ST MAARTEN – CALLALOO AND CONCH AND DUMPLING
The island is divided into two cultural plains; the Dutch side and the French side. Its history is quite complex, so, for now, I will focus on their national dishes. On the French side, their preferred delicacy is callaloo soup, a thick green soup made from greens with pork cubes, hot pepper, okra, black pepper, thyme, and chicken stock. The Dutch side took pride in conch (large sea snail) seasoned with herbs, spices and served with dumpling.

ST VINCENT AND THE GRENADINES – ROASTED BREADFRUIT AND JACKFISH
Known as the “Jewels of the Caribbean” Vincentian people adore their jackfish (which is a species of fish) with breadfruit. In the Caribbean, breadfruit is usually roasted on open charcoal or firewood.

After the breadfruit is roasted, it is baked in the oven until soft. The jackfish is pre-seasoned, fried and served along with the roasted breadfruit. It is said that Vincentian people like to wash this down with a local golden apple juice.

TRINIDAD AND TOBAGO – CRAB AND CALLALOO
Trinidad and Tobago have a variety of favorite meals, but crab and callaloo is their particular national dish. Dasheen leaves are prepared in a unique fashion, similar to a dark leafy stew/gravy type of consistency. The summery stew is served with crab and tends to be eaten as Sunday lunch.

TURKS AND CAICOS – CONCH
The verdict is still out for the Turks and Caicos Islands, although from my research it seems as if Conch (Sea snail) served with peas and rice, appears to be the winner
VIRGIN ISLANDS – FISH AND FUNGI (UPDATED)

This national dish is shared with the fellow British Virgin Islanders, although conch is widely embraced.

So, tell me what your favorite national dish is? And why?

Reference and Courtesy of That Girl Cooks Healthy: http://thatgirlcookshealthy.com/so-what-are-the-caribbean-national-dishes 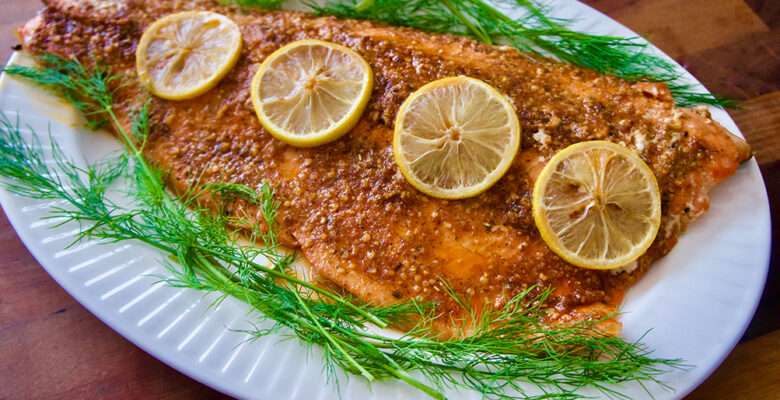 This delicious Baked Lemon Garlic Salmon Recipe is healthy and quick to make. Serve it with a side …

END_OF_DOCUMENT_TOKEN_TO_BE_REPLACED 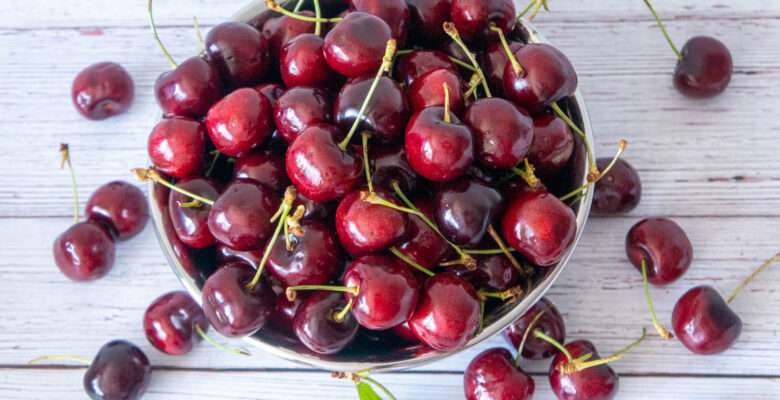 Cherries grow in many parts of the world. In the Caribbean, it is not uncommon to find a cherry tree …

END_OF_DOCUMENT_TOKEN_TO_BE_REPLACED 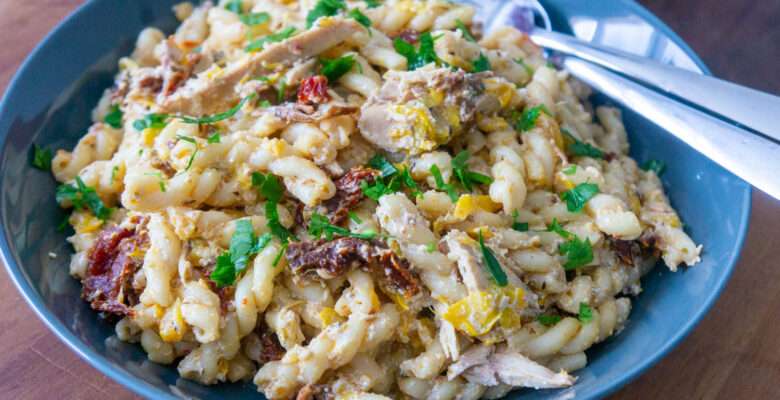 Just a few ingredients make up this flavorful Gemelli Pasta with Summer Squash, Roasted Chicken and …

END_OF_DOCUMENT_TOKEN_TO_BE_REPLACED

Share this ArticleLike this article? Email it to a friend!
Email sent!